Listen, we get it. When in between testing phases, we get a little quiet. Well not anymore! Look no further than this blog! Each month, we’ll be releasing a Dev Blog that will cover various aspects of development with some sneak peeks of what our team has been up to between testing phases, words from the team itself, and highlight some cool stuff happening in the community!

ICYMI: The Team Continues To Grow

Recently, we brought on Ralph as our new Environmental Artist! Ralph has been in the field for many years and has worked on several AAA titles including the Dark Age of Camelot series, Warhammer: Age of Reckoning, Saints Row: The Third, Red Faction: Armageddon, and Elder Scrolls Online. With a passion for creating environmental and fixture/prop art, Ralph aims to create captivating art that incites emotion and produces an immersive experience for the audience.

In addition to Ralph joining our team, we've also brought on board two new team members. Seth, our newest character artist, and Jason, our newest developer!

Please join me in welcoming Seth and Jason to Team 21 Studio!

“I’ve been playing games since I was a kid and at the age of 11, I knew I wanted to be a character artist for video games. I attended the Savannah College of Art and Design studying Game Design and have been a Character Artist on student projects for two years! Ilysia is the first project I’m joining right out of school and I am so excited to be a part of this amazing team!”

"I have been enamored with video games since my dad taught me the infinite 1-up trick in Super Mario Bros and I knew early on that I wanted to make them. Thanks to being competitive with my sister, I started teaching myself how to program 15 years ago and learned a variety of languages, settling on C# as my favorite. From JRPGs to MMORPGs, I love all kinds and for the last 5 years, I've had the pleasure of immersing myself in video games on a whole new level. I can't imagine doing anything else."

We are still looking to fill a few more roles to round out the team. If you have an interest, you can head over to ilysiavr.com/careers to see our current openings!

Behind The Minds Of Our Art Team

With our new team hires, our art team has been putting together more curated experiences and points of interest in Ilysia as well as updating creatures you’ll see throughout the world.

We begin by designing locations through concept art. This helps us create a visual representation of what we want to achieve when sculpting the world of Ilysia. From there the team breaks off to work on different aspects of the project.

Below showcases the creative process from concept art to in-game assets. 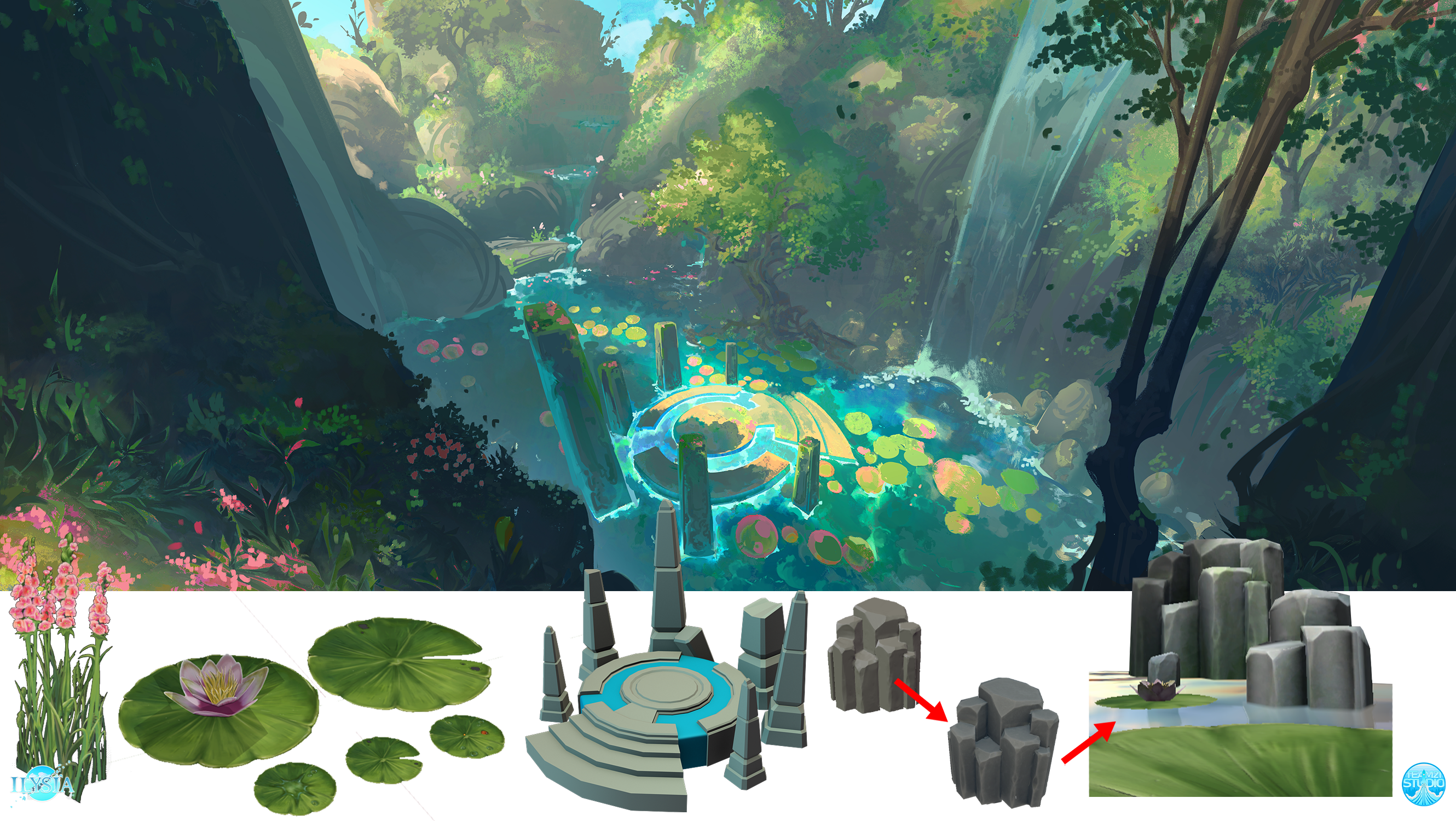 When I sat down with Pam and Abbie on our art team, I asked about their creative process when they begin working on the concepts featured above. Abbie who has been working on a lot of the foliage in the game including the hand-painted Lilly pads and flowers you see had this to say:

“I want to make the flowers as approachable as possible so when they (the players) walk into that space, they’re in awe.”

Pam mentioned that she likes to take screenshots and block out certain parts to use as inspiration when sculpting. The results are some beautiful rock formations that you can see in the above image.

Another side of our team is currently working on our character art. Kevin, who you might be familiar with for their work on our revised player models which you saw in our Alpha 2, has also been hard at work revisiting our Tokas. Below you can see some big changes to the design of these creatures.

Seth, one of our Character Artists, has been working on some pretty amazing hairstyles for our player models. Here is a sneak peek at one particular style thats in the works! Seth had this to say when working on the hairstyles:

"For me since this is my first VR game, working on the aspect of optimizing the models for VR can be a small challenge at times. Making sure the model is within the game's budget without losing too much of the model's silhouette is key!"

News Regarding Our Patreon

We're also announcing that we have reached a milestone where we are closing down Pateron after 2 years. We want to sincerely thank everyone for their support to get us to a point where we can stand on our own as we move aggressively into Beta. We couldn't have done this without all of your support, and we hope you continue to support us by getting involved in the community, spreading word about this amazing game, and getting as hyped about Ilysia as we are! Feel free to jump into our Discord or follow and interact with us on our socials like Twitter and Facebook!

To those that have backed on Patreon, you'll receive rewards up till June 1st 2022. Following that date, your tiers will be stopped. We'll be updating all Patreon rewards to reflect onto your MagePortal accounts.

We still have two months worth of rewards that are currently being worked on and we'll also let you know once those are posted out!

If you have any questions or concerns, feel free to reach out to us on Patreon!

BEANS!? Why the community has a fascination with them. 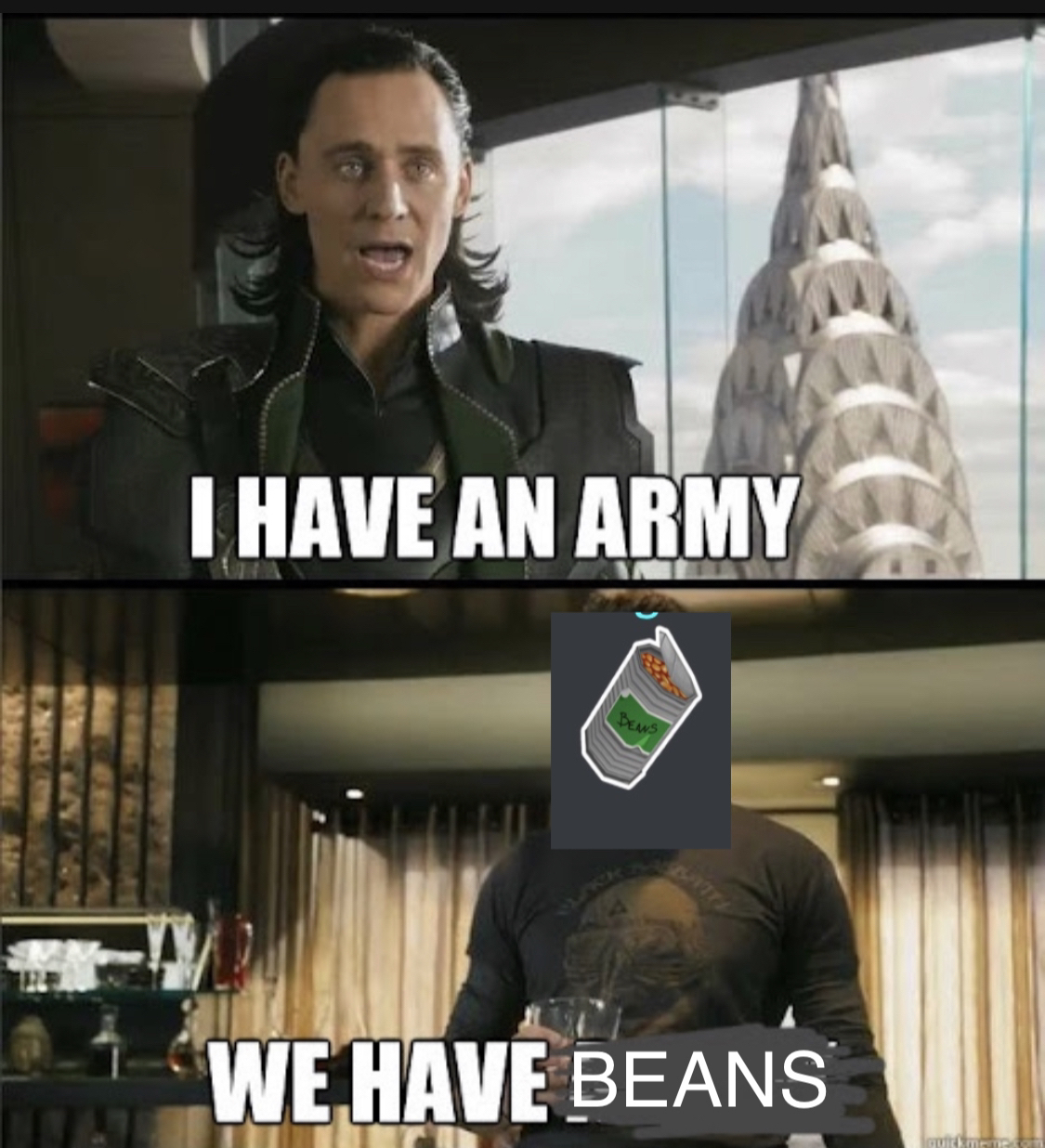 Look no further than this blog if you’ve missed our community game nights. Since October 2021, we have been running various game nights inside our Discord server every few weeks. Some previous ran games include Amongus, Gartic Phone, Rec Room VR, and Jackbox. (Note: To get pinged for these types of events, head over to our role-assignment channel in Discord and grab the event's role!)

As it happens, placing 20+ people in a drawing game opens doors to some interesting doodles. One of those just happened to be a can of beans at the time. So when you have an entire Discord server talking about beans, it's logical to add it into Ilysia, right? 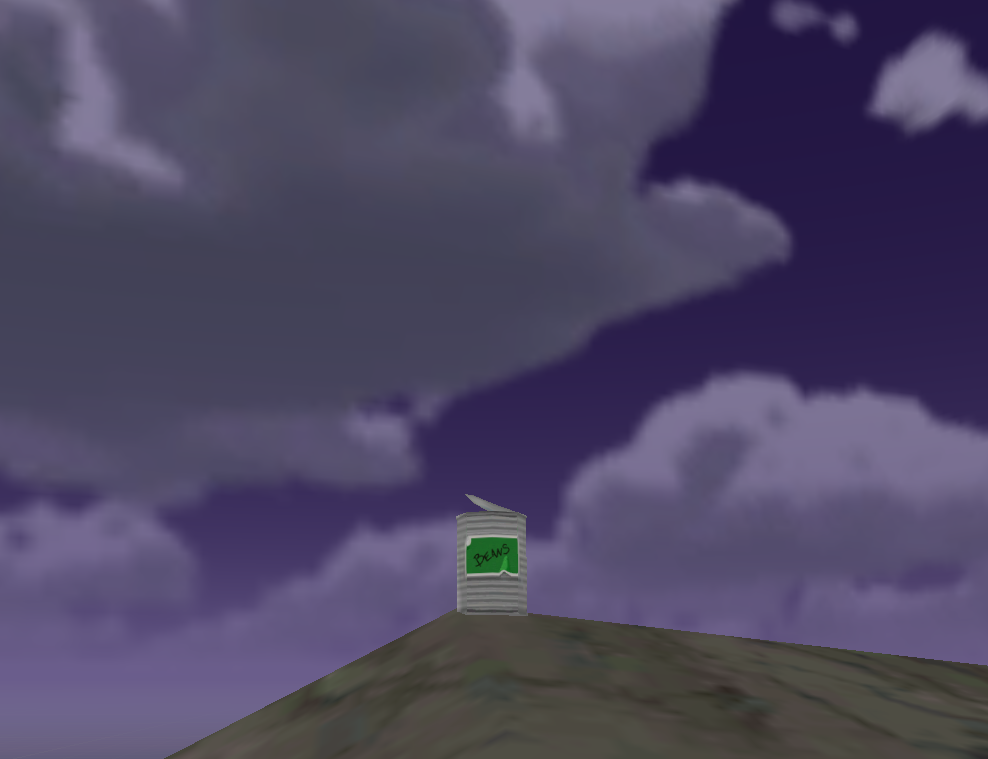 Somewhere out there in the world of Ilysia sits a random can of beans, with some players successfully finding its hidden location during our Alpha 2 Phase! Now the question is, will its location move during our Beta phase? I wonder…

An underrated aspect of our community is the creativity that a lot of our users possess. Trust me when I say this, it does not go unseen when you post your fanart, VR worlds, animations, writing, and yes, your memes. I forward them over to our team often. It’s awesome to see you all so passionate about this game! I wanted to show off some work the community has been up to the past few months with our first fanart showcase! 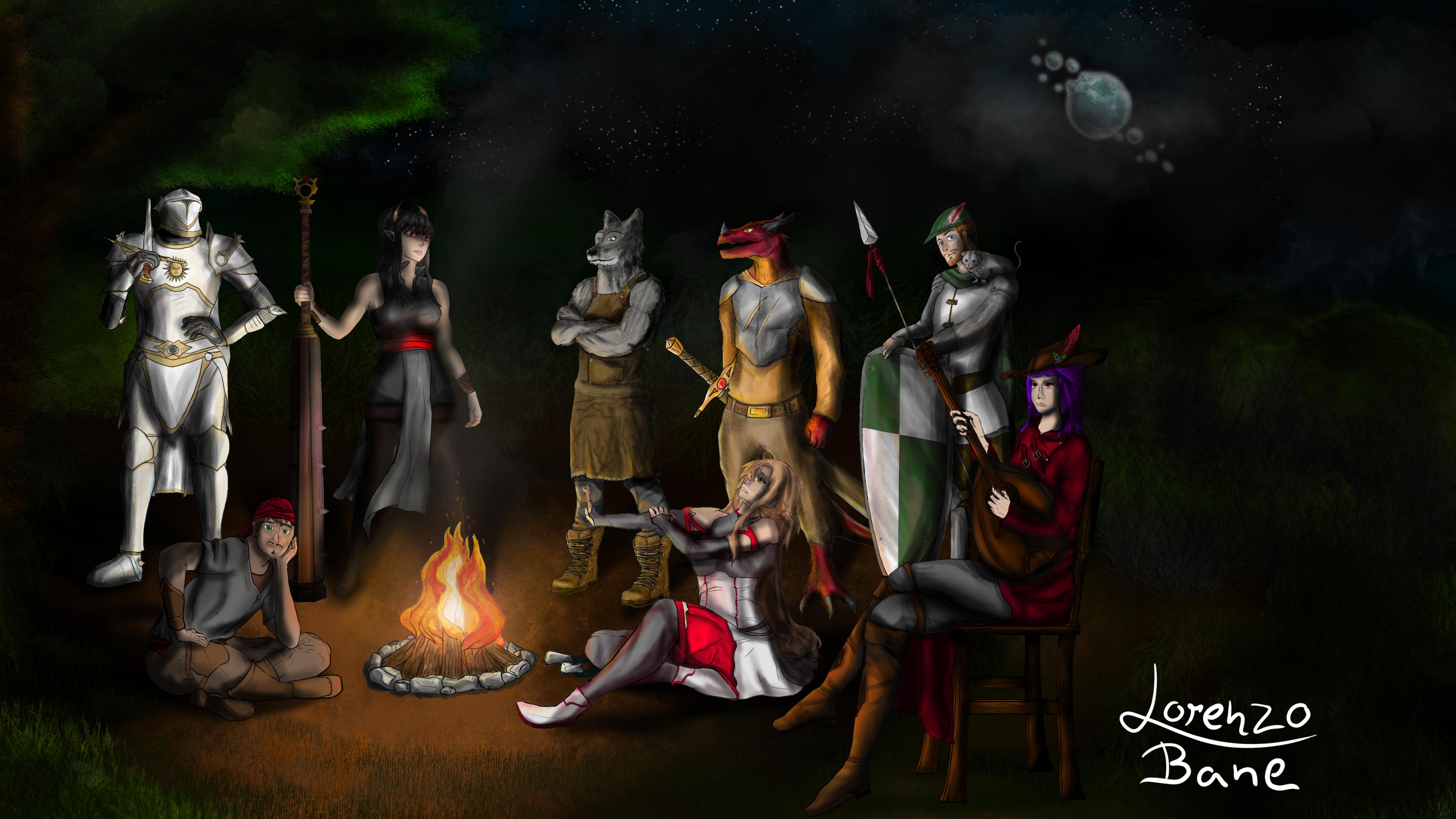 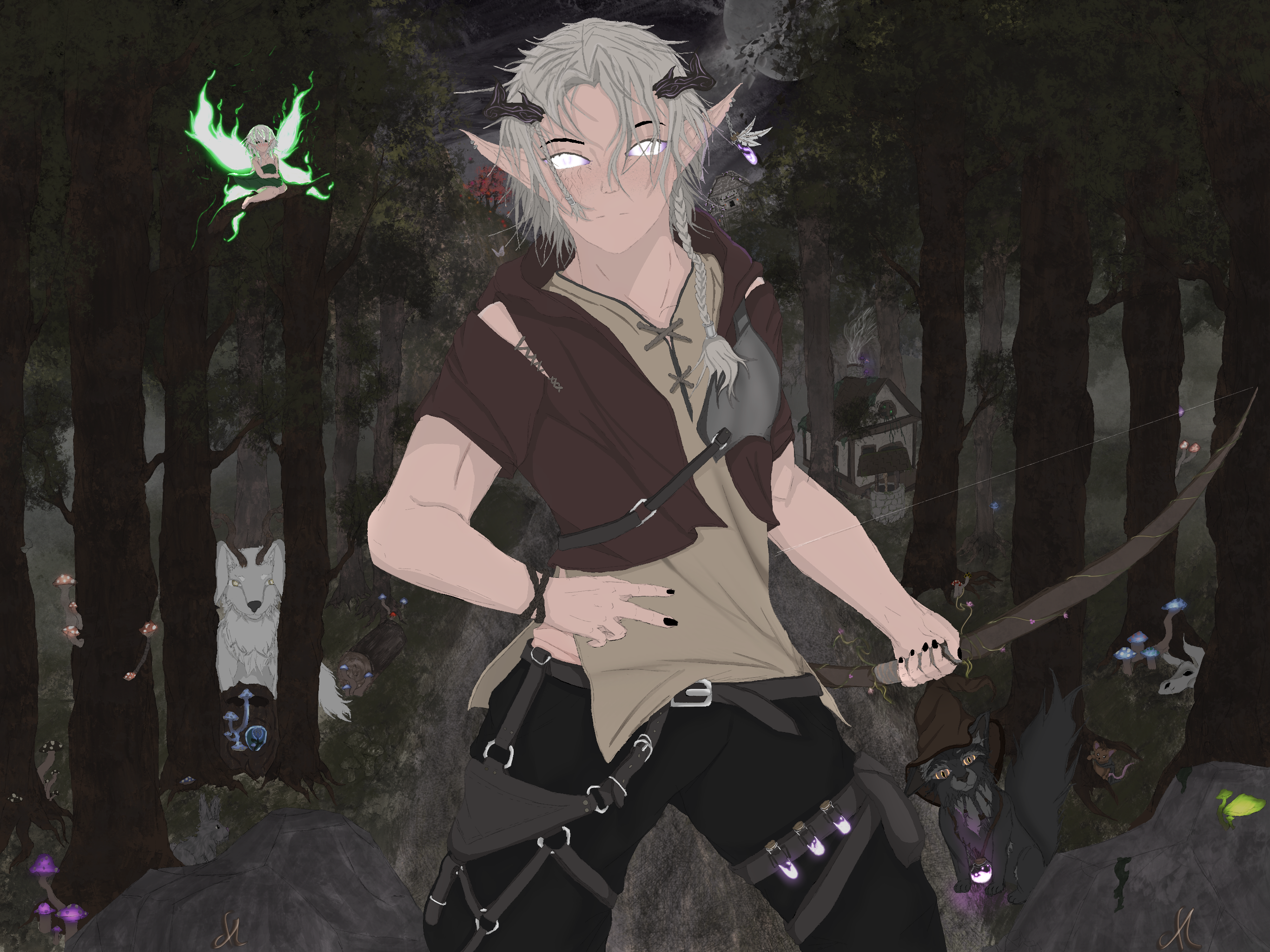 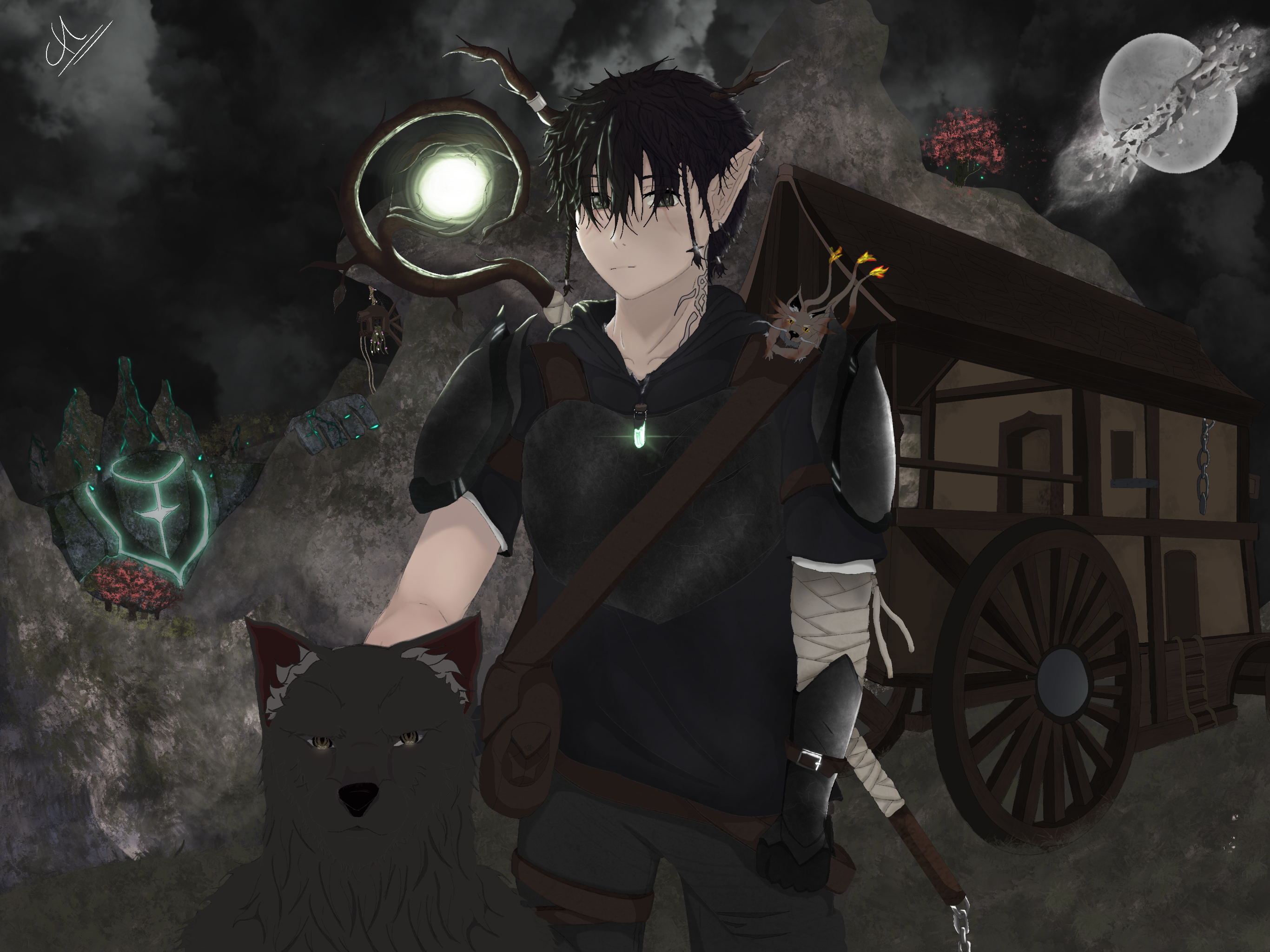 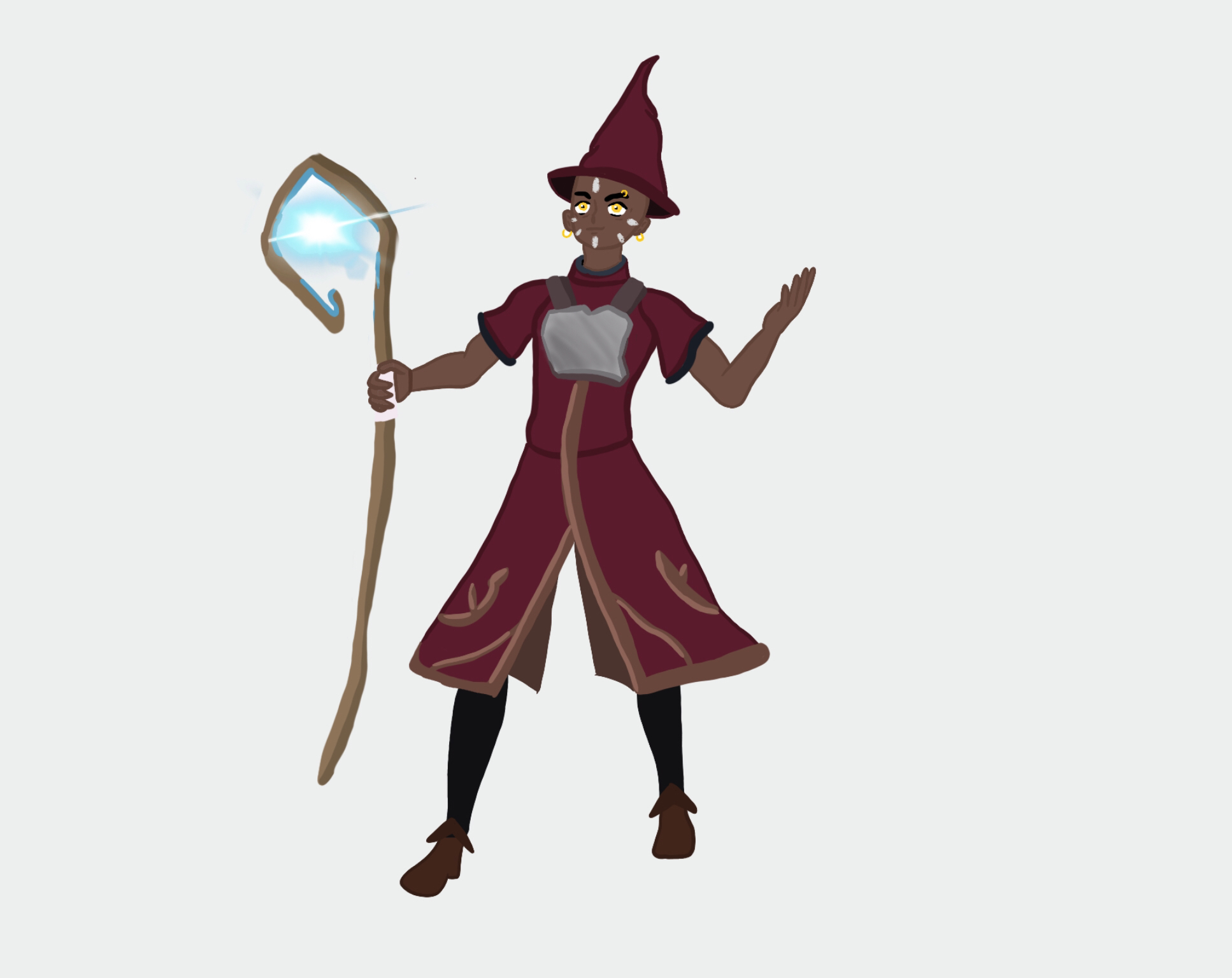 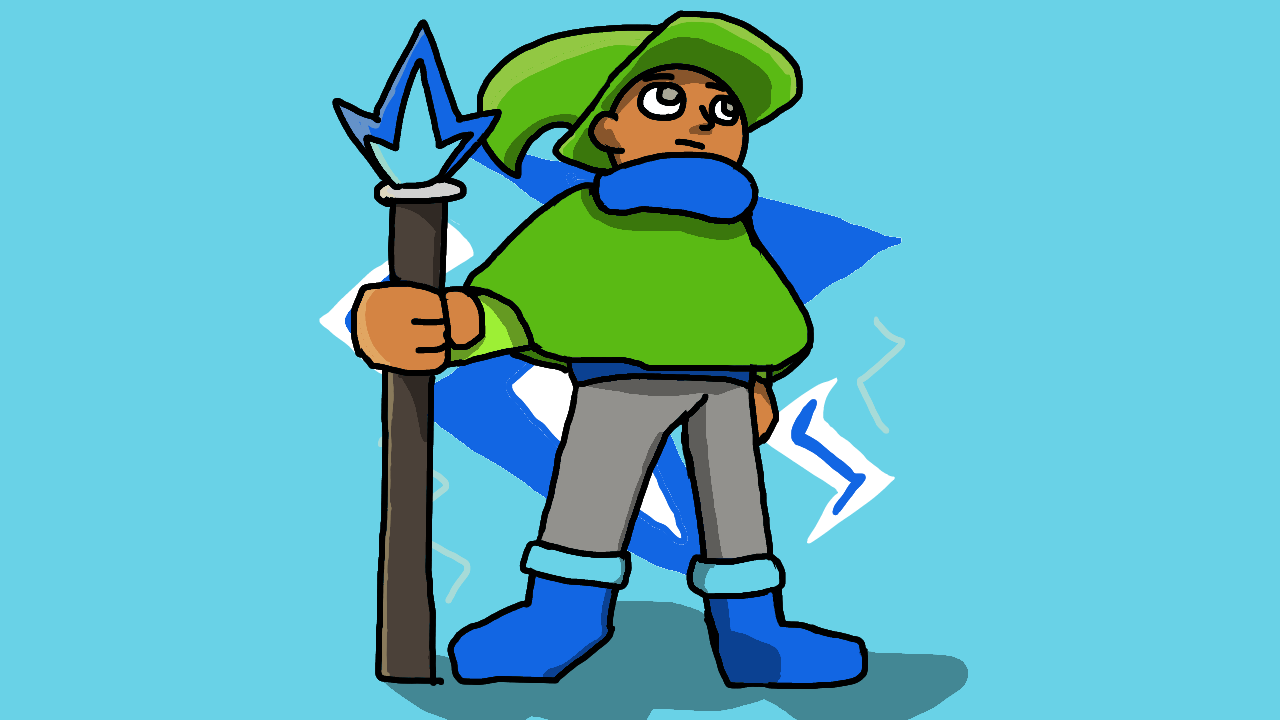 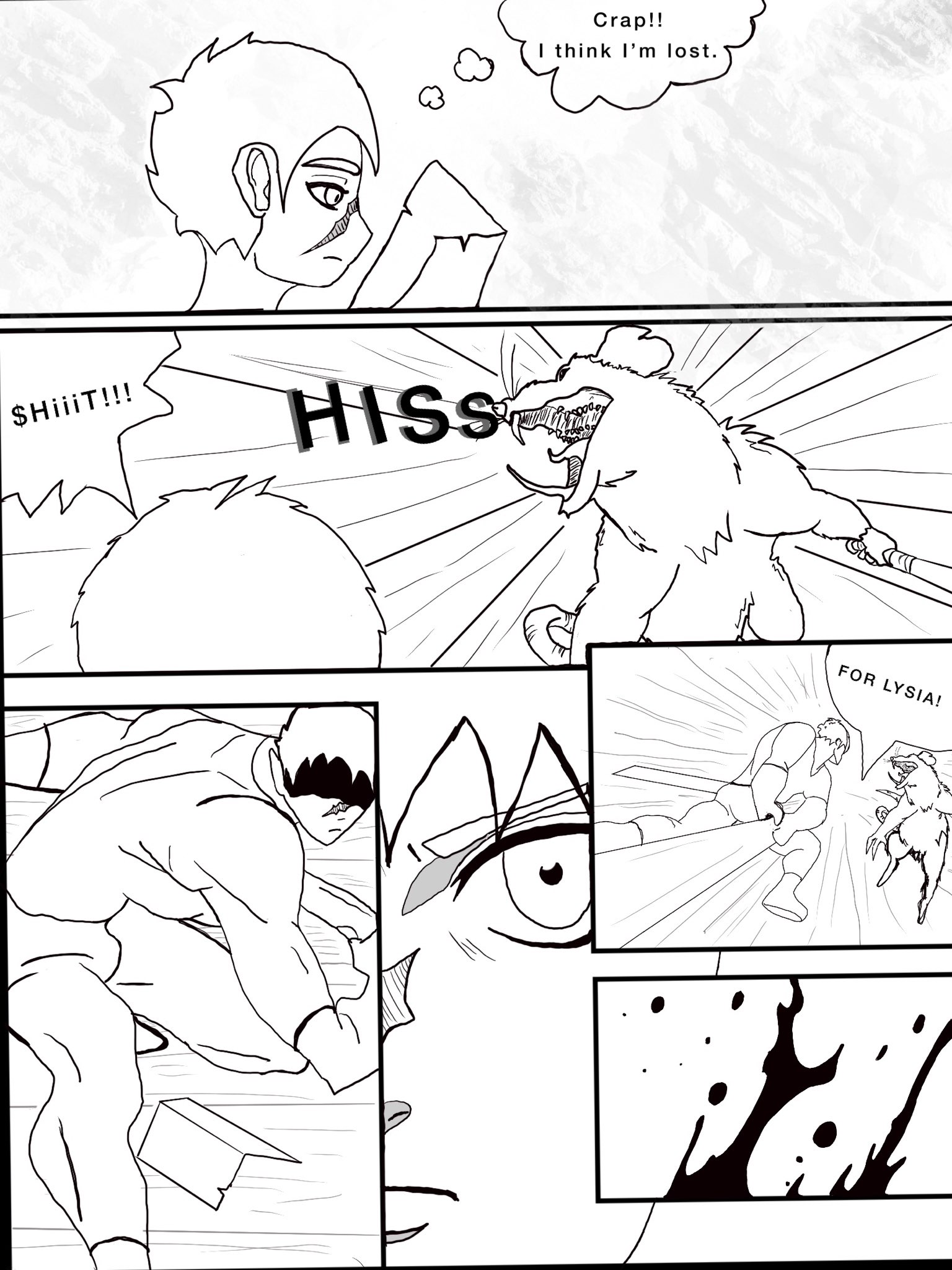 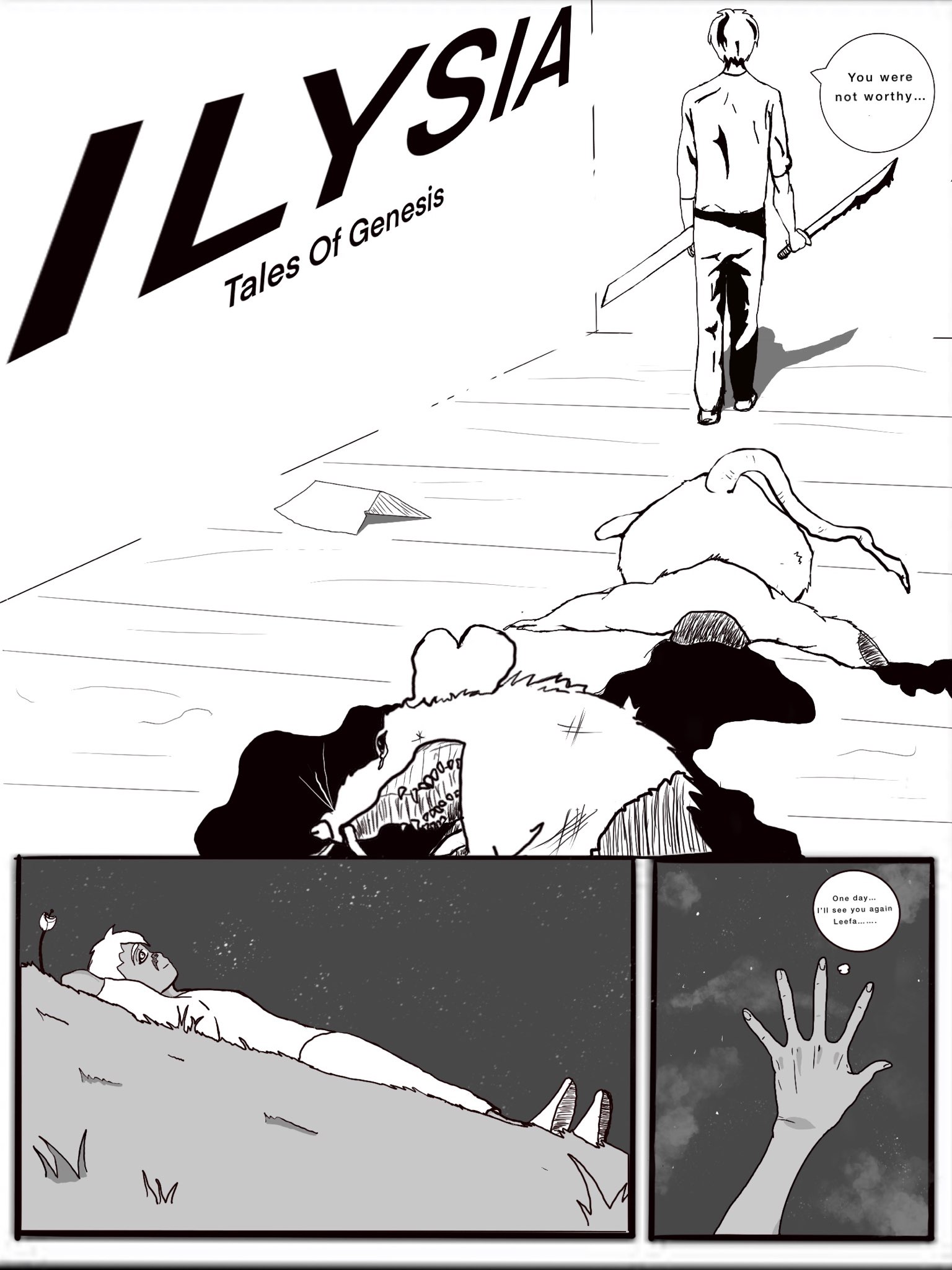 Mage of the Tower, Part I

The scar of Lagena rose high in the sky, illuminating Ilysia with a constant reminder of their hubris. Large portions of the planet separate from its surface follow the large gash, suspended in its orbit. A dark cloud drifted across its marred ghostly visage. Insects quit their chittering. Bioluminescent flora and fauna of every kind softly blinked out. Plunging the surrounding landscape into darkness. During this short span of time being colorful, loud and bright had its disadvantages against the more predatory of creatures. Usually so visible from the hill, the sprawling forest of coniferous trees were a silhouette of peaks. Belisama Lake Tower, a deeper shadowy blotch against an already dark backdrop.

With a sigh of resignation, the young lagenan stood from where he lay on the ground beneath the stars. He brushed the loose grass from his course linen pants and picked up a small cylindrical device from the ground near him. He studied it a moment, feeling his fingers around the top in the darkness. Soon his fingers found a small radial dial knob on top of the device and turned it slowly. It began to hum softly before two thin filaments inside a glass chamber sparked a bright blue and lit up the hilltop.

Just then the clouds passed overhead and the whole of Lagena once again bathed the land with its pale blue light. The life of the forest resumed. The boy grimaced as he tapped a small yellow gauge on the lantern. Not looking forward to requisitioning a Thulin recharge from an already tapped supply. “Asher won’t be pleased.” He said to himself, lowering the light and heading down the hill.

As he came to the small land bridge the led to the dilapidated towers small island an Andaari boy cut off his advance. “Kalt’an” The boy said in a loud voice that he was obviously trying to muffle, and failed. He adjusted his thin framed glasses, like large clear discs held in a silvery wire. “Master Teriander is looking for you.” The boys elven features always seemed to give the appearance of grave news. His eyebrows turned upward in a permanent panic and the soft white glow of his eyes made it difficult sometimes to discern his intentions. The single points of his gray-blue horns emitted a dull pink light.

“Toka-teeth. I know I’m late. I thought I told you to call me Kelt.” The boys deep blue skin blanched before he straightened himself. “Oh, I couldn’t. I’m not even a Tower Mage yet.”

Inside the decaying structure, another Lagenan stood hunched over an oddly shaped table. Vials and talisman of all sorts lay about its surface in disarray. Suddenly with a growl the man slammed shut a book and whirled toward them, his arm pulled back as to throw a rock he held tightly. Stopping short when he saw the two boys enter. Purple wisps of smoke leaked from a rune etched into the stone.

Visibly taking measured breathes to calm himself, he exhaled sharply, looking down at the rock. “Another failure.” He said and turned back to the table. He tossed the stone into a pile of similarly looking stones that were collecting in a bucket at the floor. A few number of them leaking various colors of smoke. “Kelt’an. Glasendri. Master Teriander is in the back room.” He said simply. Facing the table he opened the book once more.

If you'd like to be featured in our next Dev blog, make sure you post your work in our #ilysia-fan-art Discord channel!

Thank You For Reading!

While we have to keep much of what we are working on under wraps, we hope these upcoming dev blogs will give you some insight on what the team is up to between our testing phases! We are hard at work preparing for Beta 1 and we'll be sure to keep you in the loop as much as possible. Thank you for checking out this blog!

If you havent already, be sure to join our Discord for more news, community game nights, and casual conversation.

And as always, check out our other socials:

See you for our next dev blog in June!